The official summation on the inside dust jack reads “It is now six years since the secret disaster at Jurassic Park, six years since the extraordinary dream of science and imagination came to a crashing end–the dinosaurs destroyed, the park dismantled, the island indefinitely closed to the public. There are rumors that something has survived.”

But to me, this book is a non-stop thrill ride. Now, I am partial to Crichton’s character Malcolm, who does have the longest rants, including a chapter that is basically one long diatribe that I love on such a level that it is going to be something I reread constantly.

If for no other reason than because in the chapter, aptly titled Malcolm, he describes why “cyberspace” will be “the end of our species.” Why, you ask? 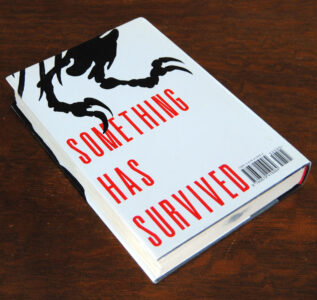 “Because it means the end of innovation,” Malcolm said. “This idea that the whole world is wired together is mass death. Every biologist knows that small groups in isolation evolve fastest. You put a thousand birds on an ocean island and they’ll evolve very fast. You put ten thousand on a big continent, and their evolution slows down. Now, for our own species, evolution occurs mostly through our behavior. We innovate new behavior to adapt. And everybody on earth knows that innovation only occurs in small groups. Put three people on a committee and they may get something done. Ten people, and it gets hard. Thirty people, and nothing happens. Thirty million, it becomes impossible. That’s the effect of mass media–it keeps anything from happening. Mass media swamps diversity. It makes every place the same.”

And since this was written in 1995, before the big dot com boom and then subsequent bust, before Web 2.0 and the rise of social media. Before smartphones, social media, and streaming, it’s not only prescient, but shows an immense understanding of the capability of the systems even in their infancy.

But let’s get back to the book, instead of my intellectual idolizing of Malcolm, which I feel he’d probably frown on, and yet enjoy. Malcolm’s configurations mark the passage of time as the story evolves. This is not dissimilar to the structure of Jurassic Park. Also, the configurations focus on the edge of chaos or chaotic edge if you prefer.

And as the configurations build and become more complex they become unstable. When put together as a whole, all of the quotes from the configurations starting each section of the book align with the story being told and perhaps it’s something to look at.

Second
“Self-organization elaborates in complexity as the system advances toward the chaotic edge.”

Third
“In the intermediate phase, swiftly developing complexity within the system hides the risk of imminent chaos. But the risk is there.”

Fifth
“At the edge of chaos, unexpected outcomes occur. The risk to survival is severe.”

Sixth
“Other collapses in simultaneous regions. Survival is now unlikely for individuals and groups.” 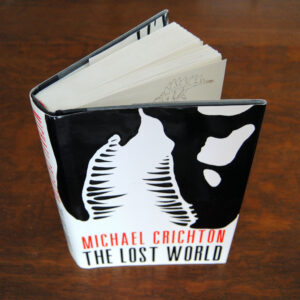 As with Crichton’s other classic dinosaur novel, there is some science and math to the theories, but unlike Jurassic Park, The Lost World spends much of its time in action. Sure there’s some of the back story reintroducing you to a world where InGEN has failed as a result of the collapse of Jurassic Park, in the first novel, but once it is established that another island exists, not to us the reader, but to the characters in the book, it’s all about getting there and what happens once they do.

This is not the movie: The Lost World: Jurassic Park, this is something much better, and I don’t say that to detract from the film, I’m saying that because as you read The Lost World, you kinda start to wish that they had been much more authentic to the book. That said, the only spoiler thing I will tell you is that you should not expect Dr. Ian Malcolm and Dr. Sarah Harding to be driving around San Diego with a baby tyrannosaur.

I will state that if you enjoyed any part of either the book or movie Jurassic Park or even The Lost World movie, then I can assure you that this book will bring a smile to your face, with each page-turning moment. I do suggest you read Jurassic Park first, but I can assure you The Lost World can be enjoyed even if you haven’t read the first novel.

Read the Secret File of technical information and quotes from The Lost World.