“Worn out after decades of packing steel and raising hell, Viv the orc barbarian cashes out of the warrior’s life with one final score. A forgotten legend, a fabled artifact, and an unreasonable amount of hope lead her to the streets of Thune, where she plans to open the first coffee shop the city has ever seen.”

That’s part of the back cover blurb. As are the quotes “High fantasy with a double-shot of self-reinvention” and “A hot cup of fantasy slice-of-life with a dollop of romantic froth.” 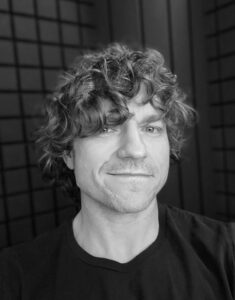 I’m here to tell you I’m here for all of it. Every single drop. While it might be tiresome to read my coffee puns, Baldree has so much fun introducing coffee to a town where it’s so unknown that the bean water references are not only more than a few, they are varied enough that they each hit like another sip of your favorite brew.

In a real world where we’re inundated with high-fantasy – a new Lord of the Rings series, a Game of Thrones prequel, and a series for The Four Lands of Shannara – fantasy has become prevalent however you watch it. Yet, this is wholly new and refreshing.

First let’s start out with Viv, the orc barbarian. She wants to transform her life from barbarian to, well, something a little less bloody. Initially, you get the feeling she would have said “less messy,” but she’s wading into entrepreneurship with investment money, hope, and legend. What she gets is more than she bargained for. It’s not unlike most real startups, whether they end up as Fortune 500 tech companies or your local small town eatery.

Does her adventuring past come back for a visit? Well, her former adventuring party members do. Is it anything more than “Orc reinvents herself as coffee entrepreneur”? Not really, but that’s OK with me. This may be a spoiler-free review, but not only does the back cover explain what you are getting into, it doesn’t overstate and it doesn’t understate.

“Come and take a load off at Viv’s cafe, the first & only coffee shop in Thune. Grand opening!” 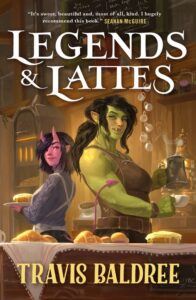 Well, let’s be real: she can’t do it all on her own, and she creates a sort of entrepreneurial party to replace her adventuring party. Cal and Tandri are wonderful partners in coffee and your introduction to them should be as authentic as Viv’s so I won’t say much more.

If you’re between Pathfinder or D&D sessions, just finished painting Warhammer or other figurines, or are tired from some variation of Warcraft or Diablo, find fantastic comfort in this warm hug of cozy fantasy. After all, not every day is filled with adventure, but it should have its fair share of coffee to relax with.

As I said earlier, Amy Ratcliffe, Nerdist’s Editor-in-Chief tweeted “This weekend I learned that cozy fantasy could be a thing thanks to Legends & Lattes by Travis Baldree.”

Well, it is a thing, Amy. Now you know it, I know it, and there are plenty of other people who will know it, too. If you don’t like fantasy this may not be for you, but it has enough entrepreneurial slice-of-life spirit that might make you want to give it a go anyway.

Read the Secret File of technical information and quotes from Legends & Lattes.

Things are turning for the bright side.
Let’s finish this up now, someone is waiting for you on that.
A difference, to be a difference, must make a difference.
More Fortunes >