Geek Space: The Shelf of Inspiration 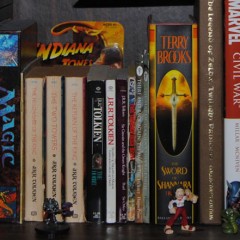 As a geek, I have bookcases full of stuff. It’s the nature of the beast. Some of it is legit storage, but more often than not, it’s an amazing trophy case of books, magazines, games and figurines from my past and present.

I don’t claim to have a legit system of organization, but its not purely chaos. As such, the space I’m going to share with you is a shelf of mine and what makes the things on it special to me.

The eyes may be the windows to the soul in normal people, but for geeks it’s often our geek spaces that are windows into who we are and how we became that person.

Geek Space: The Shelf of Inspiration

The Shelf of Inspiration from left to right:

We start with three games. The Lord of the Rings board game of which I have never fully completed a game. Mostly, due to the fact that none of my friends and I are capable of working together enough for us not to die, so the winner is always Sauron.

What would a board game collection be without Risk? This is actually my third iteration of the game, as the first two were worn out to beyond playable status.

A Magic the Gathering gift box box. It doesn’t have anything in it as my cards and decks are elsewhere, but it’s from when I started playing so I hang on to it for sentimental value. 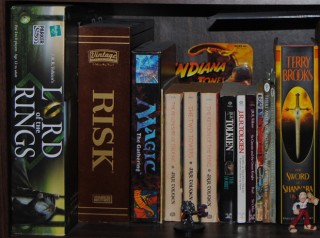 The Tolkien Section. The little book next to the Magic gift box, is actually a “See, Hear and Read”of Rankin/Bass’s version of The Hobbit with the 45 record still in playable condition. Next of note is a really beat up copy of the Tolkien Quiz Book and next to that are two really amazing map books, one of The Hobbit and one of the Lord of the Rings. Also, in this mini subsection are an amazingly illustrated The Hobbit, the Middle-Earth Atlas and the Tolkien Illustrated Encyclopedia.

Next we have the Terry Brooks Sword of Shannara Trilogy, which I was introduced to by one Jason Zapata Wordsmith, The Twilight Princess Collectors Edition Guide, which is just really well put together, although, I’ve never made it through the game, I’ve started it three times, but even with the guide, I always have a two month break in playing and seem to forget where I am.

Marvel’s Civil War hardcover trade is next. It was a great read and the extras in this book are just magnificent. It’s always nice to peak behind the scenes. We all watch movies with the commentary on at least once if we like the movie don’t we? 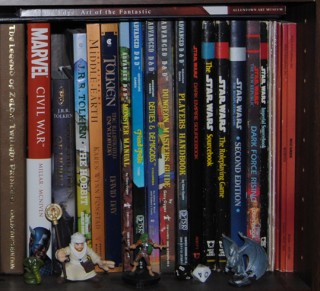 A Star Wars Dark Empire Sourcebook, a game I was able to play test at the store where I played Magic: the Gathering as a youth. Five Star Wars RPG books from the first and second editions and the crown jewel of my RPG section, the gamemaster screens, character sheets, the Scortch Sourcebook and the main Wizards Sourcebook.

Up top we have a book on the At the Edge: Art of the Fantastic exhibit that I was able to see. It’s an exhibit full of everything from Richard Corben art to the original art for Star Wars movie posters and a whole lot more. That book is laying upon an art print of Maleficent which I was able to get at a recent Comic Con.

Down in front, we have a some figures from an Indiana Jones set released when the Crystal Skull came out and a few miscellaneous gaming figurines and behind the books is a sealed Indiana Jones figure from Raiders of the Lost Ark.

All in all, a very inspiring geek space.

Courtesy is the password to safety.
Your moods signal a period of change.
Fame and fortune are coming your way.
More Fortunes >