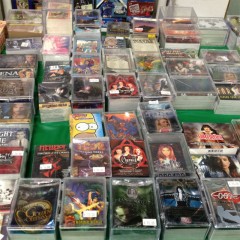 Recently, I attended the Philly Non-Sports Card Show. I didn’t quite know what to expect. I had been to “CCG” shows, but they’re universally labelled as such. So I headed out, having very little idea of what might be in store for me.

When I arrived there was a line of about 100 people waiting to get in. It wasn’t quite a comic con crowd, but there were some characters, an equal mix of genders and a very wide range of ages.

Now before I explain what I saw at the show, let me explain all I know about Non-Sports Cards. When I was younger I collected some Ninja Turtles cards, some Jurassic Park cards, and somehow I ended up with Desert Storm cards and a set from Decision 1992. I never collected Garbage Pail Kids, but I knew they existed. Outside of that, I only knew about CCGs.

This show was not full of CCGs. Although from all appearances, I assumed there was a bubble that burst on the non-sports cards industry in the mid-90’s, you know the one that hurt toys and comics, but this industry, like the others is still fairly vibrant, although not nearly as widespread or as mainstream.

By the way, I know what you’re thinking and NO, even with the huge influx of successful and popular comic movies, comic books the industry is not what it was in the 90’s. It’s very different, as shaped by our culture and the phrase geek. Toys, non-sports cards, CCGs, and comics are all still less prevalent. It only seems to have made a comeback because geek is popular, although people with superheroes on their shirts don’t commonly read comics, a huge change from the 90’s, when most “normal” people wouldn’t wear them at all. Also, nostalgia is in. You are more likely to see people with older stuff, old comic books, old cards, old toys, than you are to see them with something made last year. Old is in.

Speaking of old is in, I did see my Ninja Turtles, Desert Storm and Jurassic Park cards. Of course there were Garbage Pail Kids, I don’t think a show like this can exist without them, they are a hot commodity. I didn’t see any CCGs, except for a guy trying to unload X-Files CCG booster packs. I bought all 6 for a dollar. Why not add a little to my collection for a dollar, they retailed in the mid 90’s for $2.95.

I also picked up some marvel hero sets, for no other reason than I like leaving geeky stuff on my desk at work to remind me that even though I have a full time job I don’t have to be grown up all the time and because sometimes it can make meetings fun, although most just look at the programming code I printed and put on my board, plus my R2 unit and the other stuff and move on, but the bait is there for someone if they want to take it.

That’s not all, I picked up a set of Big Bang Theory cards for a friend. They didn’t ask for it, but they like the show, so why not? I was amazed at how the industry has continued. Big Bang Theory, Battlestar Galactica (the newer one, not the 70’s one, but they did have 70’s cards, too), Simpsons, Hellboy, Golden Compass, Charmed, Farscape, James Bond of the new and old era, Star Wars, Walking Dead, True Blood, Dexter, Fringe, Vampire Diaries, Harry Potter, Twilight, Lost, well you get the idea. Just because the industry isn’t as well known, doesn’t mean it isn’t doing what it does.

What it does? Yes, what it does. This is an industry that takes advantage of one thing and one thing only. Fandom. Everything else is just cake. Now, as for the list in the prior paragraph, some I’m surprised by, but then again, that’s probably because I’m not a fan of those things.

Back to the loot. As I was looking through all of the sets, I spyed a Spy v. Spy set and snagged it. I don’t think there was anyway that it wasn’t coming home with me. The last of my loot was a 25 cent pack of All My Children cards for one of my soap-loving co-workers.

I enjoyed the show. The vendors are friendly and the crowd is too. It’s not the same as comic con, because the people are different, but then again, they’re also the same. Fandom or being a fanboy isn’t exclusive to geekdom, it never was, but the communities within, like at this non-sports card show or at a comic con are beautiful. For the most part, it’s a community of people who are passionate about things, that’s a plural. Rarely will a fan of one thing not like something else entirely. And for a lot of us, we’ve been, at times, ostracized for our fandom, so when we all get together at a convention of any kind, we’re always nice to each other.

And on that, after school special note. Get your Geek on!

The path of life shall lead upwards for you.
Even a broken clock is right two times a day.
To let another into your heart, first let yourself in.
More Fortunes >