The Voyage of the Jerle Shannara: Ilse Witch is a Great Start to another Brooks’ Trilogy

With Ilse Witch, Terry Brooks is starting another trilogy, The Voyage of the Jerle Shannara, and he does it without really missing a beat from everything that came before it. Seriously, both The Sword of Shannara Trilogy and The Heritage of Shannara Tetralogy have an impact on what is going to happen.

What makes Brooks’ Shannara series so great is that it is generational. And while Ilse Witch has Walker pick up from where he last was, and while there are still Leahs and Elessedils, and other familiar family names and heritage, it’s no one that we’ve met before save for Walker.

So what exactly is this about?

“When a half-drowned elf is found floating in the seas of the Blue Divide, an old mystery resurfaces. Thirty years ago, an elven prince led an expedition in search of a legendary magic said to be more powerful than any in the world. Of all those who set out on that ill-fated voyage, not one has ever returned. Until now. The rescued elf carries a map covered with mysterious symbols–and Walker Boh, the last of the Druids, has the skill to decipher them. But someone else understands the map’s significance: the Ilse Witch, a ruthless young woman who wields a magic as potent as his own. She will stop at nothing to possess the map–and the magic it leads to.” 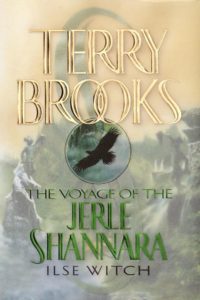 But what’s to love about this book is that it is the start of an adventure, but I sincerely love the idea that it’s urgency doesn’t cause haste.

For a good portion of the book before the journey even gets started, Walker as the Druid does anything but go directly on the quest, leading his growing party and his enemy to quandary because isn’t this a race? Why not go straight to the goal? Well, prudence doesn’t always dictate direct action.

But something new is that there are a few more modern lessons that seem to creep into this leg of the journey. This book was released in August 2001, when the world was a very different place, but there are still five relevant quotes that are lessons to the reader.

“Dependency on anything was for fools and weaklings.”

“…bad things happened mostly when you thought too much about them.”

“Because life’s dictates did not allow for quick and easy distinctions between right and wrong or good and bad. Choices were made between shades of gray, and there was healing and harm to be weighed on both sides of each.”

“Life went on, no matter the magnitude of the events that influenced it.” 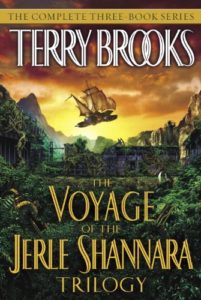 While these thoughts occur to different characters at different times, we would be wise, whether you read this book and this trilogy or not, to keep these quotes with us. Their relevance is important, which is why I enjoy Terry Brooks so much.

He doesn’t bury everything in puzzles. Sometimes, even in fiction and fantasy, the lessons are front and center, with a light shone on them so bright it’s hard to ignore.

Don’t ignore… Just read. And if you haven’t, I suggest you start at the beginning with The Sword of Shannara Trilogy, then move on to The Heritage of Shannara Tetralogy, before coming to this Ilse Witch, Book One of The Voyage of the Jerle Shannara Trilogy. Because, as Jason Zapata and I discussed on Episode 09 of The Palmer Files, the books are always better, especially in the case of Shannara and The Four Lands.

Read the Secret File of technical information and quotes from The Voyage of the Jerle Shannara: Ilse Witch.

Even the greatest of whales is helpless in the middle of a desert.
Courtesy is the password to safety.
Things are turning for the bright side.
More Fortunes >