It’s dark, not just because of what happens in the plot, but the characters are darker. Those who would do harm to our main characters seem more evil. Their allies seem more evil. But those two things alone wouldn’t make it the darkest middle book in the written novel universe. It is the fact that the main characters, our heroes, who’s hero’s journey we’re following fall down some dark paths. Some literal and some emotional or psychological. 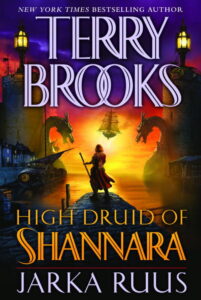 It wasn’t what I was expecting, and that is refreshing for a series that I’m now twelve books into. Penderrin Ohmsford is still on his quest, with a party of sorts, but what is most intriguing is that there are a few new characters and more importantly some characters from the previous book Jarka Ruus that are stepping into new, more important, roles.

But it’s not all characters and plot. The lessons learned from reading this novel are dark too.

The chaos from Jarka Ruus has bled into the Third Druid Order where now “Power fostered fear, and fear mistrust. The Druid order was for many the genesis of all three.”

There’s a leader in the Four Lands who lets those lesser beings work “without supervision or deadlines because … unpredictability was all the incentive they required. A little uncertainty and a few object lessons were strong motivators.”

This is a world where “Misguided and corrupt, they had yielded to the temptations offered them and unwittingly opened the door that imprisoned it. So desperate were they to indulge their own greed that they had never stopped to think what it was they were really doing.”

This is a story where “There were times … when it was best just to continue on rather than to shift directions, even when it didn’t seem as if you were getting anywhere. Your chances of success weren’t always something you could measure accurately. Perseverance in the face of failure counted for something.”

Even one of the villains in this book is thinking to themselves “Don’t overstep. Don’t over react. Don’t rush to your own doom.” And that seems ridiculous, because that’s usually exactly what villains do! But here in Tanequil, where the story is the darkest of the dark, where demons from within and without abound, the villain is attempting to take small steps. 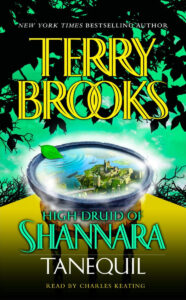 But where Terry Brooks really shines is with Pen. Our hero to this point. Or at least our lead character. Brooks writes “He used his tiny magic, his strange gift, to seek anything that might be waiting.” “Tiny magic?” That Brooks allows his protagonist to belittle his own powers is not common. Doubt exists in the series for almost every protagonist we’ve met in the novels, but this is different. This seems like a belligerent belittling of power. Something that even those mistrustful of magic and magic powers in The Four Lands don’t even attempt.

And while we’re on the subject of things not really seen in the other novels, in this universe Brooks’ has created, one of the main villains actually acknowledges Pen’s heritage as an Ohmsford. From Shea and Flick from the first Sword of Shannara trilogy on down, he writes that they “knew better than to put anything past the Ohmsfords. Their history spoke for itself. They had survived impossible situations before, several generations of them. They were imbued with both magic and luck, and the combination had kept them from harm more times than anyone could count.”

Unfortunately, as the middle book of a trilogy and twelfth book in publishing order from Terry Brooks of The Four Lands and Shannara, I don’t know that this book would stand alone. But as a fan of the series, and I don’t say this lightly, it’s worth reading the twelve that come before it, because otherwise, the darkness wouldn’t feel so out of place. If you have no other context, perhaps the rest of the books would feel lighter, but then again, the idea that you don’t “put anything past the Ohmsfords” would seem a little ridiculous if you hadn’t read about all the exploits that the “magic and luck” helped them keep from harm.

This is an amazing series, and I’m happy to tell you to start with it. It’s great. It’s fun. But as of now, it’s not as light as I thought it would be, but that’s been an exciting change being this many novels into the series.

A difference, to be a difference, must make a difference.
Good clothes open many doors. Go Shopping.
Whoever wants to reach a distant goal must take small steps.
More Fortunes >