A Spoiler Free Book Review: The Elfstones of Shannara

After having been introduced to Terry Brooks, I started at the beginning with The Sword of Shannara, which I thoroughly enjoyed. Then I moved on to book two in Terry Brooks’ first trilogy, The Elfstones of Shannara.

In that first review of Sword, I’ll admit I took the easy way out, drawing the parallels of how Brooks’ World of Shannara and his characters were derivative of Tolkien’s Middle Earth. But after having read the second book in the trilogy, I feel it’s an unfair comparison. Yes, it’s derivative, but that’s because Tolkien inspired Brooks as Tolkien has inspired many. Brooks wasn’t copying, he was weaving his own world. As such, you could make the argument that Elfstones is also derivative, but it can stand on it’s own just as well. 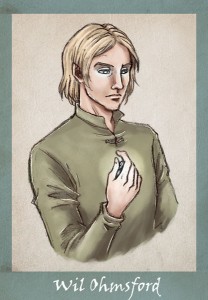 Elfstones main plot-lines involve a quest to rebirth the Ellcrys, a tree that has held back the demons of the world in the Forbidding, for generations and the War of the Forbidding as the Demons start to escape due to the Ellcrys’ failing health.

The quest to rebirth the Ellcrys is undertaken by two individuals, brought together by Allanon. He seeks out Wil Ohmsford, the grandson of Shea Ohmsford, hero in The Sword of Shannara. Allanon happens to convince Wil to undertake this quest, while his uncle Flick, also a member of the heroic party in Sword is visiting him. Flick warns him not to trust Allanon, yet still, Wil agrees.

The second individual is Amberle Elessedil, granddaughter of King Eventine Elessedil, and a member of the Chosen, to care for the Ellcrys, who has forsaken her duties as a Chosen and left her home. 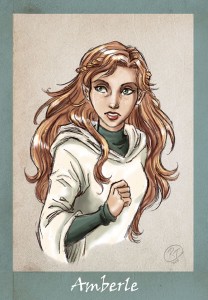 The story of Wil and Amberle is very much the story of undertaking a quest without full awareness of the quest. They don’t fully understand, nor comprehend, their quest until they are well beyond the point of no return. This makes for fascinating reading. You, the reader know more about the quest than the characters do, and Brooks does a wonderful job making them both imperfect and sincere.

Along the way, they both struggle to find themselves individually. This appears a bit ironic, as they are never really one with themselves or with their quest enough to help the other. Seeing both major characters like this struggle internally, while struggling through a quest they are learning more about as they go through it, makes for a real page turning book. 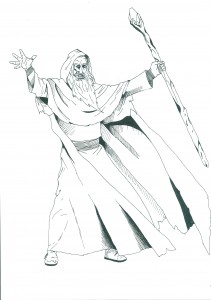 Allanon the Druid, Elfstones of Shannara, art by Rhapsody Of Temptation

The other plot-line revolves around Allanon, the Elves and their allies. Their story line is the War of the Forbidding. The demons who escape the Forbidding, first set into motion a plan to destroy the Ellcrys, prevent a rebirth, and demolish the Forbidding that has imprisoned them and those who set up the Forbidding as well.

The War of the Forbidding is massive and very well written. It takes a lot of time, it has casualties, there are many different strategies employed by the defenders and it takes place over many different locations, Halys Cut, Worl Run, Baen Draw and the City of Aborlon, capital city of the Elves, to name a few.

There are a few lessons to be learned within the pages of Elfstones. I’m not giving too much away when I tell you that it is important to know thy history. This book would be nothing without history. In fact, without Allanon’s knowledge and access to the histories at Paranor, something that should have never been forgotten almost was, and thus, the demons almost conquered the four lands without any hope of rebirth for the Ellcrys and without that hope, all might have been lost.

There are plenty of other takeaways too, but nothing I can give you without giving away too much.

Should you read Elfstones of Shannara? Yes, but I would suggest you start with The Sword of Shannara, as this is a trilogy and it is best to start at the beginning. Having said that, this book does stand on its own merit, so you won’t be lost if you don’t read Sword, you’ll just get more out if it, if you have.

Read the Secret File of technical information and quotes from The Elfstones of Shannara by Terry Brooks.

Even a broken clock is right two times a day.
Look forward to great fortune and a new lease on life!
Today it’s okay to make a few choices by going with your instincts.
More Fortunes >