Spoiler Free Review of The Wishsong of Shannara: Final Chapter in The Sword of Shannara Trilogy

Once again, the call to save the Four Lands from dark forces has been let out and, once again, it is the Ohmsford family that shall answer the call in The Wishsong of Shannara.

Like their father Wil Ohmsford and his grandfather Shea Ohmsford, Brin and Jair Ohmsford are approached by the great Druid Allanon to go on a quest to save the Four Lands from evil. 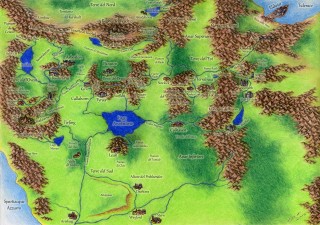 The Four Lands of Shannara by morgancygnus

After the quest for the Sword of Shannara, Shea passed the Elfstones to Wil who used them to aid in his quest to assist Amberle Elessedil in their quest to revive the dying Ellcrys, the sentient tree created to impose the Forbidding, a barrier that trapped demons in an alternate world. In Wil’s use of the Elfstones, Wil is aware that the elven magic within them changed something inside him, but it was not his life that change would shape. It would be his children, Brin and Jair, who were both born with Elven magic within them called the “Wishsong.”

The power of the Wishsong, and the bearers of that power, is why Allanon came to Shady Vale a third time to call on the Ohmsford family. This time, it was not to find a sword or rejuvenate a tree but to destroy the Ildatch, a tome which contained all the evil magics of the Four Lands from the Old World. It is revealed in The Wishsong of Shannara that the Ildatch was the power behind the Warlock Lord in The Sword of Shannara, and it was as old and contained similar powers to the evil magical creatures within the Forbidding in The Elfstones of Shannara.

And so, Allanon returns to Shady Vale and sets the task of destroying the Ildatch to Brin.

Brin’s journey is mainly with Rone Leah, great-grandson of Menion Leah, who was a member of the party that went in search of the Sword of Shannara. He is with Brin and Jair as their parents, Wil and Eretria, are away. Rone argues that Brin cannot go alone, so the pair goes off into the Eastland to find the Ildatch, within the Maelmord.

Their journey is far from a simple one, but along the way they are assisted by Old Man Cogline and his daugher (of sorts) Kimber Boh, along with her pet Moor Cat, Whisper. Cogline and Kimber Boh are friendly, but very profound people. Cogline’s greatest line in the book is, “I’m an old man. I can be what I want!” Kimber, aside from the close relationship with Whisper is a wonderful addition to the party. Although Kimber hasn’t known Brin or Rone for very long, she states at one point that, “We are to be friends, all of us, and if we are to be friends, then we must share both good and bad in our friendship.” This is amazing strength in character on her part, as she knows the immense weight of the task set before them.

Jair is to stay behind, but this is not to be, as a party of Gnomes and a Mord Wraith find him in Shady Vale, while searching for Allanon. This begins Jair’s journey, but not his quest. Jair, once captured and freed of the gnome patrol, is joined by Slanter the gnome tracker and Garet Jax the Weapon’s Master as the most unlikely of parties.

One night, the King of the Silver River came to Jair, offering him a quest to purify the Silver River at its source, which had been poisoned by the Mord Wraiths. In return, he would be able to help his sister.

Garet Jax comes as his protector, following a visit by the King of the Silver River. The king promises the Weapon’s Master the fight of his life, something he’d been searching for. Slanter, comes along, for a time, swearing that he’ll leave any chance he gets.

Jair’s journey started with just himself, then Slanter and Garet Jax, but they are joined by Edain Elessedil, Elb Foraker, and Helt. What a party that is – an Elf, dwarf, gnome, valeman, borderman and the Weapon’s Master! 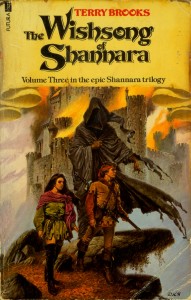 The Wishsong of Shannara Book Cover

The Quests of Wishsong of Shannara

The two journeys are separate, yet intertwined; parallel, yet very different. Both Brin and Jair struggle with their use of the Wishsong throughout, as they had thought of it as more of a trick than a weapon.

There are, at all times, three things are in play: destroying the Ildatch; restoring the Silver River; and, although Brin doesn’t know it, Jair trying to assist Brin.

This book is simply brilliant. There is not other way to put it. Both Brin and Jair struggle as a result of their talents with the Wishsong. Along the way, without spoiling anything, we learn the history of the evil that has befallen the land in the whole of the Sword of Shannara Trilogy, that the races can be resilient together, and that above all, “cures everything, that gnome ale” does.

This is a fantastic read, and it’s something I suggest you pick up after reading The Sword of Shannara and The Elfstones of Shannara. The Wishsong of Shannara is a fitting end to a great trilogy – one that, in my mind, cements Terry Brooks as the torchbearer for high fantasy, a torch he took up from J. R. R. Tolkien.

Read the Secret File of technical information and quotes from The Wishsong of Shannara by Terry Brooks.

Allanon, Last of the Druids, from The Shannara Series by MageArt

Garet Jax, The Weapon’s Master, and others from The Wishsong of Shannara by Baldpagan

Kimber Boh, Brin Ohmsford and Whisper In the Valley from The Wishsong of Shannara by lilianbelieve

The source of the art within the gallery can be found in the links below:

To let another into your heart, first let yourself in.
The path of life shall lead upwards for you.
Even the greatest of whales is helpless in the middle of a desert.
More Fortunes >