Captain America: The Winter Soldier is a Marvel Masterpiece that ties in amazingly with Agents of S.H.I.E.L.D. [Full of Spoilers] 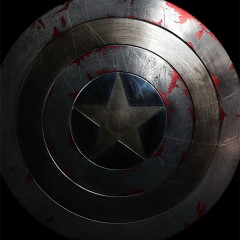 The “Uprising” saga of Agents of S.H.I.E.L.D. was almost at a crescendo in the episode before Captain America. So I went to the movie with two questions. How would Coulson fit in, as he did tell Sif, not to tell Thor about his miraculous recovery and how would Marvel tie in the Agents of S.H.I.E.L.D. universe, characters, storyline, etc.

I must point out, I am exactly what Marvel wanted. A fan who follows Agents of S.H.I.E.L.D. currently, and watched Captain America when it came out, as an extension of the show, or using the show as an extension for the movie, depending on the way you look at it. Either way, I was rewarded, by watching an unspoiled movie and seeing a deeper meaning into the woes of S.H.I.E.L.D. in the movie, because of the TV show.

[NOTHING BUT SPOILERS FOR CAPTAIN AMERICA: THE WINTER SOLDIER AND AGENTS OF S.H.I.E.L.D. AFTER THIS POINT]

[YOU HAVE BEEN WARNED] 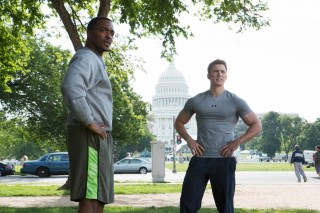 “On your left” is a great introduction for Steve Rogers and Sam Wilson. It’s the beginning of the movie and it’s a wonderful bookend at the end of the movie, as well.

I will say, that I really enjoy the friendship that Steve and Sam have, but it doesn’t appear to be unique. It may be circumstantially different, but the relationship appears to be following the same formula that Marvel used for Tony Stark and James Rhodes. I’m not saying this as a criticism, because I think that using Stark and Rhodes as the roadmap is a great idea, we’ll just have to see where it goes from here.

Black Widow is great in this movie. Acting as the ever-present female best friend to Steve Rogers, the man, and Captain America, the superhero, obviously both on and off the job. Her wit and her skills in this movie, make me want to see more of her character and there are some rumors floating around the internet that say she could be cleaning up some messes after Avengers: Age of Ultron, in her own movie. 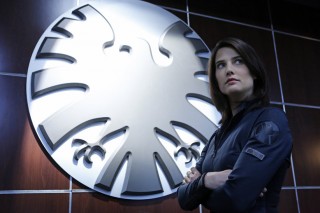 But Natasha Romanoff isn’t the only female agent that gets prominent screen time during Captain America 2, Agent Maria Hill is back and better than ever. She was good in Avengers, but unless you bought the movie and watched the deleted scenes, you don’t quite understand how important she is to this Marvel Cinematic Universe. She’s also a critical part of the S.H.I.E.L.D. leadership with Nick Fury, who needs all the help he can get, from the few people he can trust. For some reason, I expect to see more of Agent Hill, during the rest of Phase 2, but also on the television show as well.

Nick Fury, in this movie is the Nick Fury we all really wanted to see, or at least I did. He’s not management and roll calls, he’s espionage and action, all the things we hear about a super spy, he is in this movie. Of course, you can’t fake your death alone, so with his number one agent, Agent Coulson, dealing with an Uprising within S.H.I.E.L.D. concurrently on television, sort of like moving in from opposite ends to the same conclusion, he takes the other two agents he can trust, Agent Maria Hill and Black Widow a.k.a Agent Natasha Romanoff, with him on this adventure. 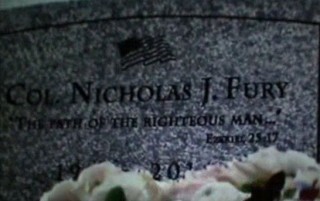 Nick Fury’s Tombstone is an ode to Pulp Fiction

Now, Fury didn’t just fake his death, he went through with it so to speak, the tombstone is there in the graveyard at the end of the movie and he’s off to England, but this is going to impact Agents of S.H.I.E.L.D. in many, many ways. We’ll get to that later, but I was a little disappointed (warranted or not) that in an entire movie theatre full of adults, I was the only one to appreciate the Pulp Fiction reference on Fury’s tombstone of “The path of the righteous man… Ezekiel 25:17.”

Now, before moving from the big screen to the small screen let’s take a look at some amazing modern Marvel Universe makeovers:

Arnim Zola as the Man in the Machine makeover

Arnim Zola goes from looking like Krang of the Teenage Mutant Ninja Turtles, to a very tasteful and appropriate “Man in the Machine” type character, with old magnetic tape data storage computers. Although, they may still go the Krang route if you saw the blueprints in the room.

Batroc the former purple and yellow skinsuit mask and facial-haired villain is now a badass vigilante, who looks like a vigilante and not like a wannabe Wolverine. The costume looks much better without the mask, too.

The Falcon: No Feathers More Tech

The Falcon has upgraded from red and white spandex with feathers to high-tech, Stark Industries type wings and jetpack. I’m not saying it is Stark Tech, I’m saying it looks like it could be Stark Tech.

During Captain America 2, we learn that HYDRA has been infiltrating S.H.I.E.L.D. since it’s very inception. While, watching this unfold on the big screen, the buttons clicked and it becomes apparent to me, as a watcher of Agents of S.H.I.E.L.D. that the uprising they are currently doing on the little screen is from the HYDRA agents who have infiltrated S.H.I.E.L.D. 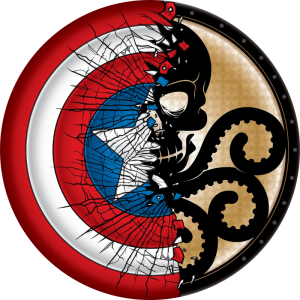 The movie and the episode following the movie happen at the same time. Fury’s death is mentioned at least twice in the episode following Captain America 2’s cinematic release, it is revealed that HYDRA has infiltrated S.H.I.E.L.D. and the end of the movie, where Cap and friends destroy the three hover carriers is mentioned at the end of that episode as well. Now Fury, is on the lamb while Coulson is still trying to reach him. That will be somewhat of an issue, although it appears Coulson and what remains of his team, will be back in action to survive as best they can.

What does all of this mean? It means, that the Marvel Cinematic Universe is taking a page out of the comic books they write, where, for example, to get a full understanding of the Civil War storyline, you’d also need to read Amazing Spider Man. This is the case with Captain America: The Winter Soldier and Agents of S.H.I.E.L.D. 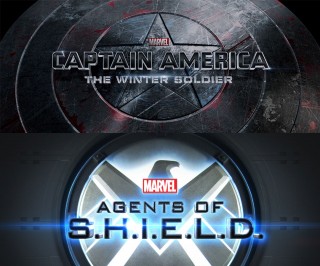 Captain America The Winter Soldier and Agents of SHIELD

That being said, it’s a great movie that I cannot wait to own. I’m excited for whatever’s next, Marvel has me hooked, both on the big screen and the small screen and I’m comfortable with that. And I’m sure it is the way that Marvel would want it to be.

If I had posted a spoiler free review, it would all of been redacted anyway, i.e.:

Read the Secret File of technical information and quotes from Captain America: The Winter Soldier.

Captain America: The Winter Soldier Cap and Fury look over the Helicarrier Fleet

Arnim Zola may still get the Krang treatment

Look forward to great fortune and a new lease on life!
Things are turning for the bright side.
Fame and fortune are coming your way.
More Fortunes >