“The Visible Man” is a wonderful read, it truly is. It’s about a scientist Y__, who reaches out to therapist Victoria Vick, claiming to have cloaking technology that renders him nearly invisible. This allows him to observe what random individuals are like, when they are alone. He has reached out to a therapist to deal with his sensation, not feeling, but his sensation of guilt, because of the technology he commands. 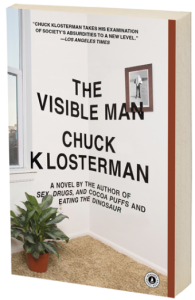 The Visible Man by Chuck Klosterman

This book follows an interesting format, that of Victoria’s transcribed accounts of sessions with Y__, and her thoughts on how to treat him. But this book could very well be called “Armchair Anthropologist vs. Therapist,” because their relationship as patient and therapist, is far from normal.

The observations that armchair anthropologist Y__ has on the insights into human nature, when individuals are alone is extremely interesting. The details he recalls of observing certain individuals is both insightful and, at times, creepy.

On the other hand, Victoria, the therapist, has her own issues, dealing with everything Y__ says. Is this the truth? Is this contrived or make believe? Does this person have noble intentions? How can I help this person?

There is a growth in Y__ the patient and Victoria the therapist throughout the book, both in their relationship and individually. 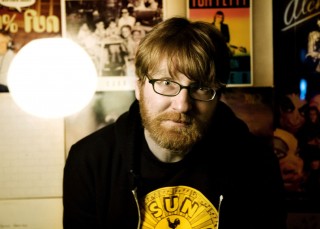 Klosterman’s grasp of writing has always been exquisite, but this, his second novel, is by far his greatest non-essay achievement. I have enjoyed his other books, but unlike “Eating the Dinosaur,” “Sex, Drugs and Cocoa Puffs,” “Chuck Klosterman IV,” and “Killing Yourself to Live” this isn’t a collection of essays, that makes you stop and think after each one.

This is a novel that you don’t want to put down, once you’ve started. You just want to keep going until the pages are gone and you’ve finished. Then you can think about what you’ve read. At the same time, this is still Klosterman and there are great lines, “Your eyes are like a search engine,” is perhaps my favorite line from the book, being that it plays on the old, “Your eyes are the windows to your soul,” quote we’ve all heard before. But that’s hardly the only notable quote from the book:

“The creation of expectation is its own independent process…”

“Even the invisible are insecure. It’s the most universal problem we have. It’s so universal, it might not even count as a problem.”

And all three of these quotes are stated by Y__. But there is one line, in particular, that seems to be the author Chuck Klosterman, channeling himself through the character of Y__, to make a statement, less about Millennials and more, about Generation Z, which is:

“Kids live through computers now. They make all their friends over the Internet, so they don’t understand how non-verbal communication works. They don’t understand body language or casual sarcasm. They love irony, but they never understand any joke they don’t make themselves. In a hundred years, no one will be able to talk in public. Talking will be like blacksmithing.”

This is brilliant and something that Mr. Klosterman, could very well have saved for his next collection of essays, except that the statement itself is so complete, it doesn’t require any additional explanation. This is a spoiler free review, and thus, these are just a few things that jumped out at me from the text, but they’re hardly the only things within the book. Beyond there story, there are plenty of lines, in addition to those I’ve quoted that will make you stop and think.

Sharing little joys offer great hope to others.
A difference, to be a difference, must make a difference.
Look forward to great fortune and a new lease on life!
More Fortunes >